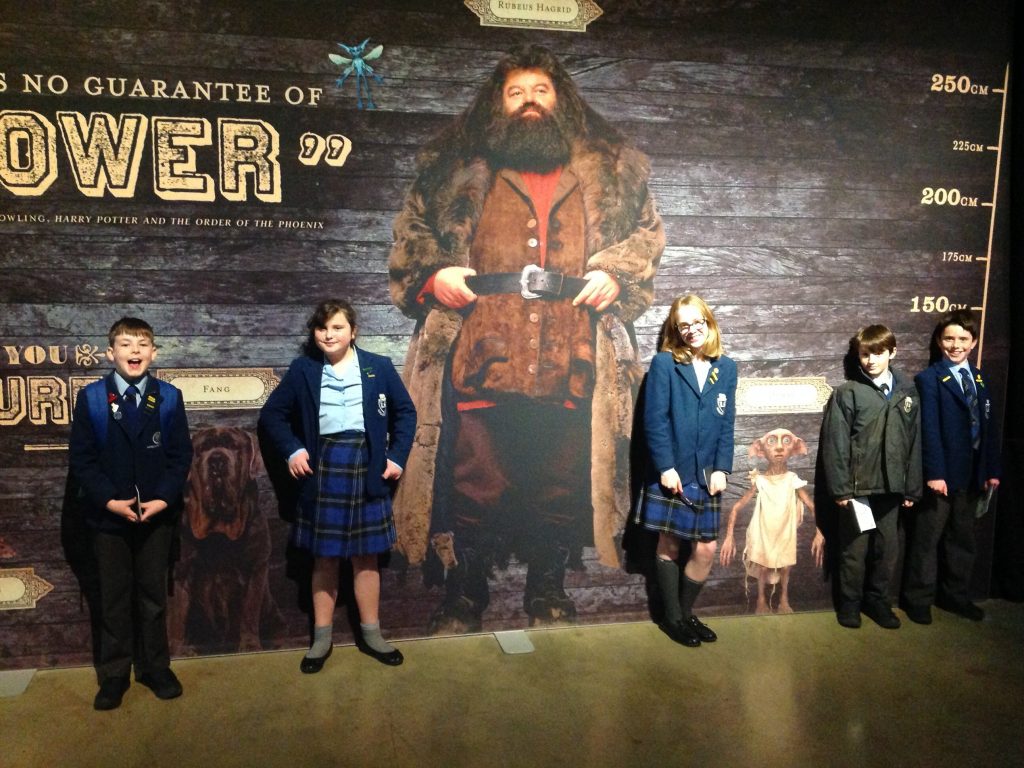 As preparation for senior schools, in English Form VI are studying Harry Potter and The Philosopher’s Stone. On Tuesday, Form VI made the trip to Watford and the Warner Brothers’ Studios, to get a behind the scenes look at how the Harry Potter films were made.

What a marvellous day! That really sums up the total experience! It is difficult to summarise the collective “Wow!”, but I’ll have a go.

From the opening experience of spying on Harry’s cupboard under the stairs, to the introductory hair raising film, the thrills didn’t stop coming. Pushing through the grand doors, we entered the splendour of the Hogwart’s dining room and saw the original costumes of the characters ( it is just as magnificent as it looks on the film). We learned that Hagrid was played by two people; Robbie Coltrane is the face, but he was too small, so they used a very famous rugby player called Martin Bayfield to act as his body double.

We learned that the magnificent beamed ceiling of the dining room, is in fact a model of about 6 feet long and cameras were used to create a sense of size and majesty. All of those moving stairs? There’s only one! We learned that in the Quidditch scenes, the actors don’t really fly! I was a little disappointed with this, but did manage to sit on a broomstick and have a background mounted on the green screen. An excellent picture.

Our hour long lesson ‘From Script to Screen’, showed us how a film is created, from the book, through the money men, to the actors. We had no idea how many people were actually employed to create the films and how long it took to even start filming. Some actors would take 5 hours to have their costumes fitted and made. A werewolf had to have 5,000 hairs individually stuck to his costume every day! Some actors had to have their food liquidised to be able to eat through their head pieces – they drank their dinners! Hagrid’s hut was flown down from Scotland to Watford, suspended from a helicopter, because the weather in Scotland was too bad to film.

Our experience continued with a sense of awe, examining the detail added to costumes, masks and all the other props in the film. The books in Dumbledore’s study are infact telephone directories covered in faux leather. There were 17,000 wands and boxes made for the films; artists were commissioned to paint all of the portaits you see in the film.

To be honest, I could rattle on about the “Wows!” all day. Suffice to say, the Form VI children were able to see how the imagination of one woman and her words could be taken and shaken and moulded into the wonder of the films we have seen.